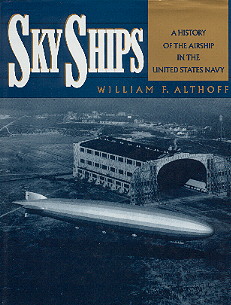 Sky Ships, a history of the airship in the United States Navy, published 1990 by Pacifica Press. By William Althoff, 304 pp.

Out of print. Buy it from the NAS Lakehurst gift shop online or used from Amazon. Here’s an excerpt concerning the consruction of the Shenandoah at NAS Lakehurst, New Jersey.

Finally, it should be noted that Lakehurst is open for tours. If you live in New Jersey, you may want to visit (you know who you are).

I picked this book up in late summer 2000 at the Tillamook Air Museum, in Tillamook, Oregon, on the Oregon coast, an air museum housed in the surviving hangar of a former Navy blimp station (or NAS, Naval Air Station). If you’re a Nova watcher, like me, you may recall a Nova (entited “the Blimp is Back”) on blimps and alternative flight technology shot around 1991 in which a home-made rack of surplus Huey helicopters, all welded together, falls apart explosively on the airstrip, and later features an impossibly large building burning.

That building was the other hangar at Tillamook NAS. The buildings are huge, impossibly large. They have many interesting airplanes, and yet, the museum feels homey and small. It’s definitely worth a visit if you ever hit the fantastically beautiful, and gratifyingly remote and isolated, Oregon coast. Portland dwellers, just drive west for an hour. Everyone else, buckle up.

The book itself is a fanatically detailed history of United States naval lighter-than-air aviation. The program began during world war one, but only began to see actual flight after the end of the war, with a British airship and the United States designed and built Shenandoah. There were also some soft-bag airships imported from the British, known as the B-type, which were effectively wingless American biplane fuselages slung under gasbags. Alas, I could find no images on the net of this incredble bit of jury-rig engineering.

UPDATE: I was mistaken, somewhat, in characterizing the Shenandoah as United States designed – she was actually built using plans developed in Germany by the Zeppelin operation, and can be considered the direct forerunner of the great zeps we think of most commonly when the subject comes up, namely the Hindenburg and the Graf Zeppelin. She can be immediately recognized in photographs by her streamlined control fins; all the later ships employed more blockily shaped fins in order to increase control-surface area. She’s clearly the ship seen on the cover of Sky Ships in today’s graphic.

Sigh. And an update to the update. first, the cover of Sky Ships actually shows the Los Angeles, built in Germany by the Zeppelin company for the Navy immediately after the end of the war. The image is in fact of her coming into port at Lakehurst for the first time; Dr. Eckener is in command of the ship. The Shenandoah was in fact reverse-engineered from a zep brougt down over England, but was indeed built in the United States. A diagnostic distinction between Shenandoah and Los Angeles is the externally mounted control car of the Shenandoah.

The most surprising thing I gleaned from the book was the detailed internal politics of the US Navy from the end of World War One through the 1960’s, when the LTA program was halted. The author spares no detail in recounting the byzantine posturings of the various service departments and interest groups as they jockey for position and for their share of the ever-growing, ever-more-astoundingly-huge defense budget of the United States of America.

Unfortunately, from the author’s perspective, and, I suppose, from mine, LTA was a consistent loser in these lobbyist’s wars. I believe that the author’s intent in detailing the politicality of military budgeting is the soldier’s intent in the oft-heard complaint “I’m a soldier, not a politician”.

Naturally, such a statement, although fervently subscribed to by the utterer, is at best a misrepresentation of the facts, and persistently creates difficulty in public discourse concerning the military. It’s my opinion that it’s an effective defensive tactic deployed in democratic combat, and in point of fact, my reading of this book supports that view.

Nonetheless I found it fascinating, rather than a dirty shame. If military budgets are easily documentable as the result of political processes, then, the development of these budgets can and should be completely open to the public as all political processes should be in a democracy. The fact that much of the politicality of the process is documentable is in and of itself reason to toast our democracy and her traditions.

However, one of the most important tactical determinants of the political defeats of the naval LTA program is clearly the repeated loss, in the dramatic airship wrecks of the Shenandoah, Akron, and Macon (as I recall), of the senior airship brass within the Navy. If the most committed admirals died in peacetime as the consequence of the difficulty of safely operating a small number of large, rigid-construction lighter-than-air ships, one might reasonably conclude that ambitous younger leaders might prefer to explore such technology as, oh, the aircraft carrier.

Indeed, one of the lessons I drew from the book was that the reason we lack those fabled queens of the sky today is not due to the dim vision of evil bureaucrats, or due to the horrible, lingering publicity of the loss of the Hindenburg. It’s physics.

Something that big, which moves slowly, has negative bouyancy, and retains the mass of any object the size of two football fields, is, first, hard to control, and second, at the mercy of, well, everything.

After the Los Angeles, the last of the great American dirigibles and the only one not lost in amazing wrecks (stay tuned for a piece on the wreck of the Shenandoah in Ohio!), the Navy refocused the program on smaller, soft-bag vessels, which operated successfully thoughout World War Two as convoy escort scouts. These vessels are the direct ancestor of today’s Goodyear blimp, and in some cases are still in service with the Goodyear company. Goodyear, naturally, prays before candles nightly that a military LTA program will rise from the dead. In point of fact, their candles may be well burnt, if they know how to speak Boeingese.

At the tail end of the program in the early sixties, a new technology was emerging which tied a large, rigid keel to ever-larger soft lifting bodies. Within the lifting body itself? A long-range radar station. These ships were designed for high-altitude, near continuous service, something like a high-altitude geosynchronus satellite, but, duh, within the atmoshpere.

As noted earlier, Boeing and Cargolifter have just announced a partnership. One of the proposed uses? Long-range high-altitude surveillance.