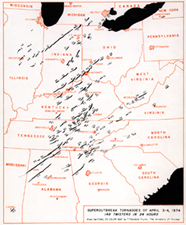 Listening to the coverage of the tornado storms of late April 2002, I was put in mind, as I am every time I hear coverage of tornadoes, of my experiences on the evening of April 3, 1974. I was eight years old. The map above links to a very large and detailed version; here are some photos.

Over April 3 and 4 of that year, the largest outbreak of tornadoes ever recorded swept across the midwest. 127 tornadoes were documented during this outbreak. My family lived in West Lafayette, Indiana, the home of Purdue University. My parents had dropped me off at the apartment of a classmate for babysitting, as they had some sort of engagement that night.

As I remember it, shortly after they left, the weather became very gloomy, and the clouds took on the extraordinary grass-stain green that I still associate with tornado weather. The apartment we were in had no basement, and it made me quite anxious. We’d gotten used to retreating to the basement of our house during the regular tornado watches that are a feature of spring in tornado alley.

I have a memory of looking out the second- or third-story sliding glass doors that led to the balcony of the apartment. Silhouetted against the evening sun beyond the cloud deck, the shafts of no less than four tornadoes danced and writhed in the distance, the fingers of a giant hand reaching from above. I have no idea if this is a legitimate recollection or something that I later inserted into the memory. The map above appears to record only one track through Tippecanoe County. However, the NOAA records also refer to tornadoes with multiple funnels, and to one in particular that went through Tippecanoe County at 4:50 pm.

There were at least three small children in the apartment. We were pretty scared. Indeed, I think the experience of being without shelter and separated from my parents was profoundly traumatic for my sister. For the rest of her life she had a true phobic reation when exreme weather watches would occur. I think, however, that this did not really take root until a few days later.

A colleague, or perhaps a graduate student, of my dad’s was living, with his prtegnant wife and maybe another child, on a rented farm in rural Tippecanoe County. We’d been out to the farm several times the previous summer. The tornado or tornadoes I was watching destroyed the house in which these people were living. As I recall, my father’s colleague was away, possibly at the event my parents were attending, and his wife went to the basement, as instructed by the weather alerts.

In the basement, she was huddled down, when suddenly, she felt a dripping or spitting. Looking up, the entire house had been removed from the foundation. I don’t recall the details of their story. But I do recall standing on the sodden soil, looking down into the hole in the ground that was once a basement. We went out to see the damage as a family.

It’s interesting to note, however, that among the tornadoes which struck this past week (the last week of April, 2002) was an F5 – the strongest grade – in Maryland, the first that a storm of such ferocity has been recorded in Mayland. For more info, here’s a NOAA article on the storms.

UPDATE, July 2020: Apparently I have, for years, had a late-80s vintage bluegrass song about the outbreak in my vast collection of tunes.